Kuroyukihime's Return (黒雪姫の帰還, Kuroyukihime no Kikan?) is the 1st volume of the Accel World light novel series, published on February 10, 2009.

Even in the future, all the advances and innovation in the world can't change the dynamics of the school playground. And for Arita Haruyuki, a fat kid in junior high, that means he's destined to always be at the bottom of the food chain, prime pickings for the school bullies. But when he is approached by Kuroyukihime, a beautiful and aloof upperclassman, Haruyuki's life is turned on its head as he dives into Brain Burst, a mysterious computer program, and the Accelerated World with her help. It's in the Accel World that Haruyuki casts off his depressing reality and takes hold of the chance to become a Burst Linker, a knight to protect his princess!

Haruyuki Arita is in class, taking down notes from the virtual blackboard when he gets an email. As soon as he opened the email, he was surprised by a sudden sound and a flash of colors causing him to panic slightly. The email was a voice email from Araya, a bully, who told Haruyuki to get him and his friend's lunch, and to meet them at the top of the school roof, out of the Social Camera's view. After Haruyuki had given the food to Araya, he went to the toilets where he could «Direct Link» in peace without being bullied. In the Virtual World, Haruyuki heads to a large tree that's at the edge of the school's network. On his way to the tree, he hears a commotion nearby and looks over to see a group of people surrounding a girl. Haruyuki recognizes her as Kuroyukihime, the Vice-President of the Student Council. Haruyuki then moved away from the commotion and went up the stairs of the tree, where the «Virtual Squash Game» was situated. As Haruyuki played, he thought of how it would be much better if they didn't have classrooms at all, but did everything VR. As he finished his game a voice behind him spoke, which was revealed to be Kurashima Chiyuri who had been looking for him. She then called him an idiot after noticing his score on the game and telling him to link out and join her for lunch, which he refused. After Chiyuri Linked Out, Haruyuki went to play another game before being "Force Linked Out" by Chiyuri who had snuck into the male bathroom to find him. Leaving the bathroom, Chiyuri tried to cheer up Haruyuki by offering him some food that she made for him, but he struck it out of her hand in frustration, and then ran away as Chiyuri picked it up. Later on, when Haruyuki went back to the «Virtual Squash Game», he saw that someone had beaten his score. He then heard a voice and looked around to see Kuroyukihime, who offered him a way to Accelerate faster.

After an unpleasant dream the night before, Haruyuki wakes up, drenched in sweat. Before leaving home, Haruyuki absent-mindedly connects his Neurolinker to the global net to receive lunch money from his mother, forgetting about the promise he had made to Kuroyukihime the day before. He then leaves the building, but about 3 seconds later he is automatically accelerated, much to his surprise and he is challenged by Ash Roller. After taking in the realism of the stage, Haruyuki loses swiftly. At lunch, Kuroyukihime laughs before stating that is what he gets for breaking his promise to her, through a direct connection. Kuroyukihime then agrees to tell Haruyuki more about Brain Burst. The two then accelerate, and Kuroyukihime asks Haruyuki to challenge her. 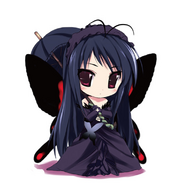